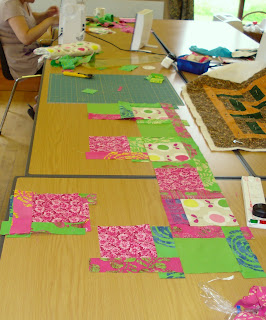 This is what happens in our lovely quilt cave.... I think there's an expression... 'Have wheels, will travel' ?... we have something similar... "Have tables will spread out" he he he. This is Rachel, using only three tables whilst designing her quilt, very clever!

She cut out the centre squares and decided to frame them on only two sides, she loves pink! 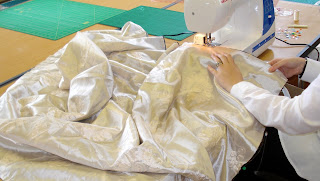 This is Sarah, apparently known as Cappy. She made a throw using brushed cotton type fabric for the back and taffeta with curly-swiry embellishment for the top. She happily stitched away on her brand new sewing machine... not really quilting but she had fun and that's all that matters really. 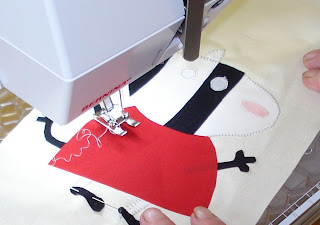 Joan The Shop spent the whole day doing applique. She very much likes the Bernina blanket stitch so she was using an Aurora... I bet she will be very nice to Santa this Christmas, he he he 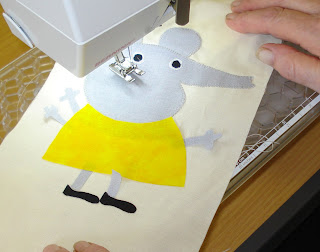 Joan's getting into these Peppa Pig characters, her grand daughters look at every detail so Joan has to be very careful about every tiny bit and some are very fiddly.

Pauline finished off the little cushion front that she was working on last week, then cut and stitched her strips for a Rail Fence kiddie quilt. 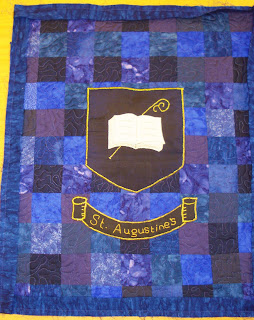 Helen had everyone looking over her shoulder at one time or another. She had her first try at free motion quilting and made it look so easy that the ladies all want to have a go now! Helen is now suffering, in the same way I do from time to time (almost always to be honest! he he)She's making this wall hanging as a gift and now loves it and doesn't want to let go of it, he he he!

Maid Marian did finish her Mat & Ruler bag, just as I thought she would and easily remembered to bring her very own cutting mat with her! wooohooo. This is her Railfence quilt, she's making it because she wants to go back to basics (always a good idea) even though she's been a quilter for many many years. The ladies were amazed at how fab it looks in black and whites. 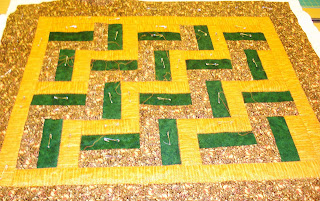 Barbie Bunny quilted using a herring-bone style decorative stitch, following the seams of her patchwork. Her thread colour choice was perfect, it all looks really good... much to Barbie's delight, it would have been really hard to rip out! 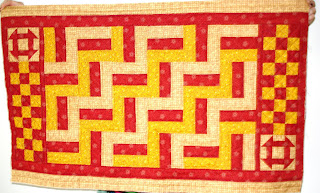 Ta Da!!! My Mum finished quilting her table topper! After making the Railfence blocks, she decided it wasn't long enough but hadn't enough fabrics left to cut strips so we did 9 patches... not quite enough of those either.. hence the two Churndash blocks... I reeeeeally like this quilt, I love it when we improvise!

I know haven't mentioned everyone... not too much time for taking pictures, lots of fun all day though... perfect!
I bet you can tell this post is a little bit rushed? I have to go to Leek Show in a few minutes..... I hope the weather hold up for it!
Posted by Angie at 6:28 am