I spent a lovely day in Quilty Quarters, popping out occasionally to sort out stuff in the various domestic appliances, including the kettle!
A full day of stitching was achieved...
Once all the strips were stitched together.. tricky with all those angles I wanted to meet perfectly!... I came to a big deciding bit... what to do for borders. 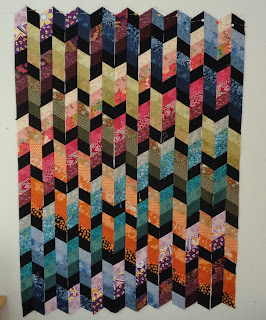 Jan Hassard (she's the lady who taught the workshop) doesn't add side borders to her design, but my project was too thin for how long it was, in my very own opinion that is... I had some quite long pieces of each of the strip sets left and really, I could have continued cutting the 2" strips to make the quilt wider... but no... This project has to be finished ASAP... I really want to take it to SPQ for 'show and tell' on Thursday (Staffordshire Patchworkers and Quilters) also... I have sooooo many things on my pile that I would rather be stitching, including Kate Tunics all cut out and waiting!.. so... after half an hour or so of playing with ideas, including leaving it and doing something else... I just sliced a 5 inch wide strip from each of the strip sets and fudged some background shapes for the corners. 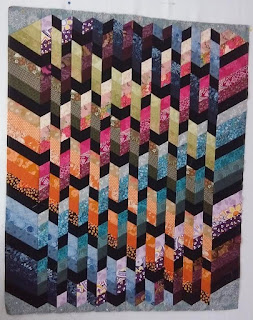 It turned out OK and lick-etty-split my better proportioned quilt top could be declared finished and, much to my surprise, I actually quited like it! Sandwich time...
I pushed my sofa to one side and rolled up the rug (it's clean under there! ha ha ha) to make my quilt sandwich on the living room floor... if I had gone down to the shop to use my tables, two things could have happened
a. I would have stayed too long tidying and faffing with the fabric on the new shelves (Yes, I had a new shelf!!) or
b. I might have come back with another quilt kitted up ready to make because I had a few fabulous new books added to the stock! ha ha ha 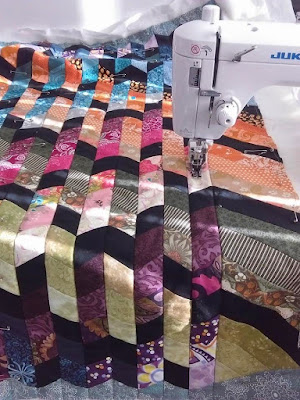 I had started to quilt like Jan Hassard quilted hers, lots of stitching and lots and lots of thread colour changes... not to mention all those ends to tie off... it would have taken me all of my days off to do that. I rooted for all the right colours of thread and spied one of those mono-filament ones... I hate that stuff, really really ... but I used it! I got loads of quilting done, in the blooming ditch no less!!!
I'll show you later...
Posted by Angie at 7:49 am