Last year in March, the week after our Quilting retreat at Alison House, while we were still free-ish and my shop was still open but were all expecting the lockdown to be announced, Angela brought in a pattern that she wanted to make. 'Gossip In The Garden', I've helped a few customers with their own versions of this very popular pattern but Angela just asked me to please kit up all the fabrics she would need to make the quilt top and left it to me... Oooh heck, It's all very well choosing fabrics for folk when they are in the shop to agree or not... but this time I was on my own! Angela left saying that there was no rush and to contact her when the Kit was all ready... which I did... but it was quite a few weeks later as the Lockdown was a very strict "Stay At Home" and I am a rule follower!!! Angela eventually was able to collect her fabrics... 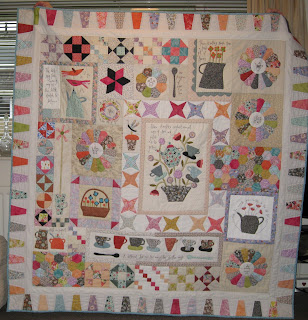 Recently she sent me this picture... It's finished all ready!!! She does most of her piecing and quilting by hand so I am very surprised to see it all done... I guess she has had a lot of time though, with nowhere to go!! I think the fabrics are wonderful, of course I do. I suspect there were a few added from Angela's very own stash to0... Raise your trumpets please... we need a good loud Toot toot toot fanfare for this fabulous finish. 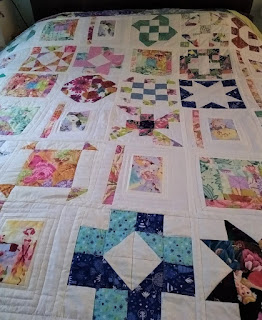 Norma sent a few pictures too. She's been working on the blocks for this project for over a year... I remember she was making them during the March Quilting retreat too. Each block made and quilted then joined together, apartment-ly.... During Lockdown Norma has been sitting on grandchildren and home schooling them... goodness me, my mind boggles!! ha ha ha 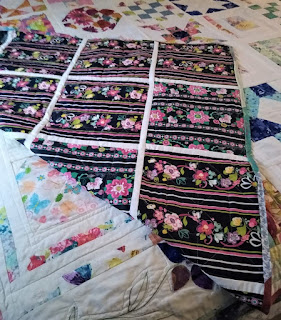 You can see the sashing strips used to do the joining better from the back... It's a huge quilt so Quilting each block was the only way Norma could proceed. It's a very popular method with my customers. Toot toot toot Our Norma, you have done a grand job, its a fabulous and finished, rather huge quilt. 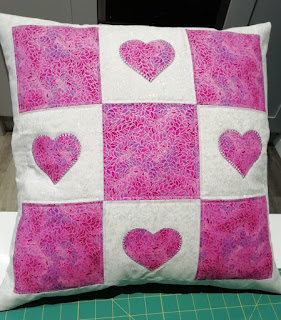 All Day Di (Also known as Lady Lidl) Is cracking on with her PhD pile... you know the one... A box or pile of those Projects Half Done! She had forgotten all about this lovely cushion. Started only about 5 years ago, it is now fabulous and finished so... toot toot toot Di, better later than never eh. 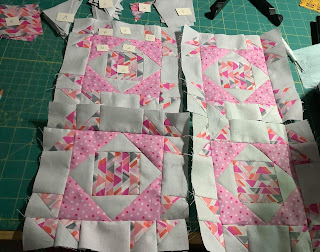 Just Edna came to my shop for her pre-booked shopping slot, in September, with a very important project in mind. There's a baby coming, how lovely. The first block always takes a bit longer to make when you are not familiar with the making... traditional piecing usually needs a few more brain cells, don't you think?
The second block took a while too though... a little bit of unpicking was involved... but the units are the right way up now. 4 blocks done so far, you can see there will be a fabulous secondary pattern when the blocks are joined together too. 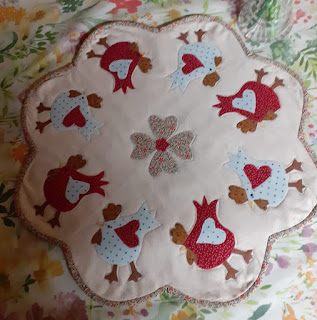 Farmer Lynda finished her beautiful Table Topper.... She really enjoys all the preparation for sticky stuff , machine stitched applique. From all the tracing to the cutting out and sticking... like play school!!! Lynda has never done curved edges before so the Bias Binding had her worried. A little reassurance from my very own self helped a lot, so she says, I'll take that!! Toot toot toot Lynda, a fabulous finish and a new method learned.
Thank you for sending me the pictures Ladies...
Posted by Angie at 1:10 pm