You're Not Going To Believe It....

I have two cameras now. One silver and one purple, yet I still didn't get any pictures for you...
I left both cameras at home!!!

I looked back in my blog posts for something worth revisiting... there's loads of great pictures and some wonderful stories... Can you remember this one from 3rd February 2013?

*** I'm not sure why we tend to look for 'The Funny Side' of most situations, is it just a British thing?... I know it feels good to laugh and goodness knows we quilting junkies laugh a lot. There's another saying, I'm sure you've heard it, 'You have to laugh... otherwise you'd cry', what does that mean?... Oh, I get it now... Eventually, when the quilt is finished, Joan might laugh about this quite disastrous occurrence, which has left her very unhappy,upset, demotivated, quite frustrated AND packing up and moving house!

Joan The Shop has been working on the 'Chocolate Fish' quilt for well over a year, and that's not counting the many months of searching for all the perfect fabrics she needed. There's a great story to this quilt, and you will hear all about it soon enough.
Last week, another chapter was added to that story, the title of the new chapter? The Night The Mice Ate The Cheese... 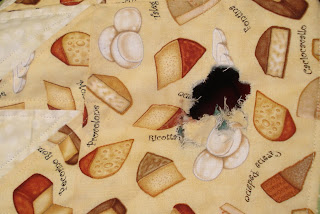 Now... are you laughing because the mice ate through Joan's quilt starting with the cheese fabric or have you taken a sharp, inward breath of disbelief? Do you feel some of the horror Joan felt when she saw what had happened to her lovely quilt?... It's actually worse than it looks.
If you've been visiting my blog for a while you'll know that Joan The Shop makes rather large quilts, each one pieced together one quilted segment at a time using our very popular, Apartment Quilting method. For this Fish quilt, we broke Joan's quilt down to manageable pieces by making the centre in two small halves then adding one last row of centre 'fish' blocks to each border, quilting them and apartment joining them to the centre... I hope this is all making sense... Believe me, it's been a lot of work. Joan's been making steady progress and there was only one border piece to add to finish. Joan had been hand stitching the backing joins one evening, at bedtime she folded up her quilt and tootled of for a good nights sleep. The mice must have had a busy night, not only did they eat through the cheese fabric, the wadding and backing of this piece... they actually ate through every block in a direct line down through the folded quilt... four layers, four big mouse eaten holes, they're about 3"!
It's been quite tricky to repair Joan's quilt. Fortunately she had spare pieces of the main fabrics so we've been able to appliqué invisible patches over the top holes, we'll carefully cut wadding patches, hole shape, and whip stitch them into place, then there'll just be appliqué patches to add to the backing... Joan wanted to cry when she saw what had happened to her quilt, no wonder eh. We shouldn't be laughing, it's a terrible story, but... Was it a coincidence that the little pests started eating the block on top, with the cheesy pictures, do you think they kept eating their way through Joan's quilted layers because they were wondering where the cheese flavour was?
I told Joan not to worry, the horrific event has added a little extra interest to the quilt's history. It doesn't matter if anyone notices the patches, in fact... I'm sure that, long into the future, everyone will be very curious as to why the patches are there... maybe Joan could make her label a bit bigger and include the story, surely the reader would be able to chuckle.*** 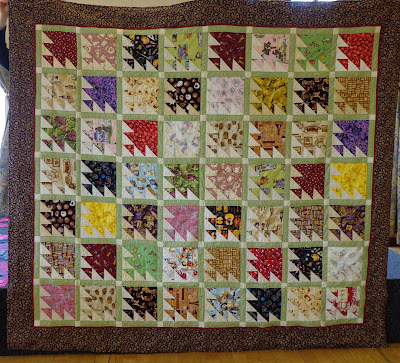 It's time to tell you about Joan The Shop's latest finished quilt... the one we have had to continue calling The Chocolate Fish Quilt. As you might have noticed, each block has been made using different 'interesting' fabrics. If you haven't seen that during the making process, click on the image and take a closer look. This quilt has been planned and made as a surprise for Joan's brother and his wife. Each fabric represents something in their life. They eat healthily so Joan included the fruit and vegetables  They love France, there are French themes. Country and Western, there's both the clothing and the music represented. They enjoy chocolate, real chocolate so that explains the first block. They read so there's book fabric and so on... wine, guitars, cats, coffee, golf bread, and the mouse-y favourite CHEESE. This quilt has been a roller coaster of a ride for Joan... what with the months of collecting the right fabrics from all over the internet and quilt shows, the sheer size of the quilt and the Mouse episode. It's all been made and quilted in separate pieces, apartment quilting. Joan had begun to feel she would never finish working on it... but once the pieces were all together and the binding was stitched on... she perked up and, on finishing the very last stitch, she announced 'I really quite like it'.
Toot Toot Tootety Toot Joan... what an achievement!
Posted by Angie at 8:11 pm