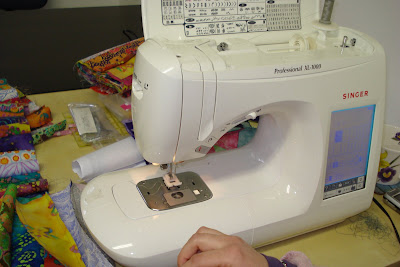 This is Sofia's sewing machine. It is a Singer and it’s one from the top of their range, a "Professional XL 1000"
Sofia's mother gifted this machine to her, especially for her to learn patchwork and quilting.
Sofia has been coming to quilt classes for a long time now. The problem is, that not once has Sofia been able to do any class or an All Day Sewing Day in the Quilt Cave, without screaming at this machine.
It makes very messy stitches.... all loopy on the back, bobbin side. We had tried many times to get it sewing evenly, changing needles, threads, rewinding bobbins, cleaning.... nothing worked. So Sofia took the machine for a full service with a much trusted sewing machine shop. On return, it sewed well... for approximately 2 metres. So Sofia took the machine to the authorised dealer for Singer.
They looked at it, sent it back, charged their fee etc..... but it still would not sew without looping the bobbin thread. So she took it back to the Singer dealer. They said the machine would have to be sent away to the main technician for Singer, this was in Porto, so, as Sofia lives in Lisbon, she was to expect to be without a machine for two weeks.
6 weeks later, no machine.
Sofia went back to the shop several times to enquire about the Singer. No luck!
Eventually, 2 months later, the machine came back. Sofia emailed me to tell me she had to pay €93 to get the repaired machine back. She was very happy to get it back.... Until she came to use it and discovered it was no different than when she sent it, but her purse was lighter!
Sofia returned the machine to the shop, who, in turn, returned the machine to Porto. 4 weeks later the machine was returned with a message for Sofia not to send it back again because the technician there, in the main Singer technical place, did not know what was wrong with the machine and they cannot mend it!!!
Well how is that for customer service!!!!
Sofia's sewing machine, Singer, top of the range, computerised, professional sewing machine is useless and Singer can't do anything to help her!!!
What is a girl to do in this situation???
I really don't know.
Does anyone have a good plan? An idea of how we can help Sofia resolve this. The machine is out of it's guarantee, only just though.
It has hardly been used, looks like new, been very carefully looked after... and yet Singer say, “Don't bring it back, we don't know how to mend it!” Well, if they don't... phew….. who does!!!
Posted by Angie at 1:27 pm

Angie's Quilt shop, open daily 9:30- 4:30
Closed Wednesdays and Sundays
3 Queen Street
Cheadle
Staffordshire
ST10 1BQ
Telephone 07807530441
email.... angiequilts@gmail.com
I don't really buy fabric to sell...
I buy fabric for you to choose from...
Book a group visit and have my shop all to your very own self! Available most Wednesdays.
Call or email Angie to book and for more information... 07807530441

Angie
Stoke On Trent, Staffordshire Moorlands, United Kingdom
Basically, this blog is a diary with pictures. It follows patchwork and quilting projects made by myself in my Quilty Quarters, and those made by all the lovely people who come to classes and workshops. There will be quite a few snippets about daily life in my very own quilt shop too.