New Sue decided to put her paper pieced (foundation pieced) Log Cabin quilt blocks to one side so that she could make a good start on making this quilt for her Grand daughter. It's a pattern from a Layer Cake book but Sue bought yardage on t'internet and cut it into an assortment of 10" squares, It's a rather stunning quilt and extremely easy to make. As for stitching it together... Mr Rubik might wish he had invented the game!!!

Sally called during the morning sounding like a damsel in distress... she's been working on a pile of quilt blocks for over two years and needed a little guidance on how to join them together. 'Come on over to my very own quilt shop' I said, so she did! The blocks only needed a little trimming and fudging. One block will be re-made and, after that, the quilt will be back on track... Sally went home more like a damsel on a mission!

Sheila's been quilting a lot at home... all those cross hatched lines in the borders take, what feels like, an age to stitch and they make an awful lot of ends that need tying off and threading through... oh but sooooo worth the effort.. doesn't it look stunning... even dramatic... yes, that's what it is, Dramatic! I'm thinking it looks perfect alongside my Terrazzo tiled floor too!

Claire is one of the 4 new ladies from the Evening class. She had never used a sewing machine, EVER! It's a good job she arrived a little early as we were able to go over the anatomy of the machine... "this is the foot that we press to make it sew" Well, look what she made!! Claire took to patchwork like a 'duck to water', she mastered the cutting, the straight lines, fabulous scant 1/4" seams... everything...

Elizabeth came to evening class too. She's sewn many many garments in the past so was quite familiar with sewing machines, not the one she borrowed from her daughter though... we soon sorted it out and Elizabeth went on to make half of her Railfence table runner... Both ladies booked to come again to the next evening class, which will be Thursday 24th May, 6:30pm - 9pm.
Posted by Angie at 8:51 am 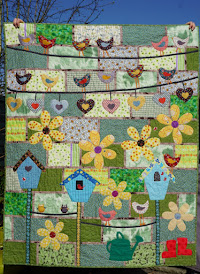 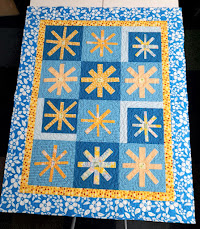